This is our first shot at pre sunrise.   We are there earlier enough, now it’s about what kind of light we want outside dark blue, medium blue or light blue.   We can shoot this wide, move in closer and give the client variations,  for the final illustration.   By doing a pre production walk thru,  I was able to tell my client what I wanted on the ouside light and what time we should start. 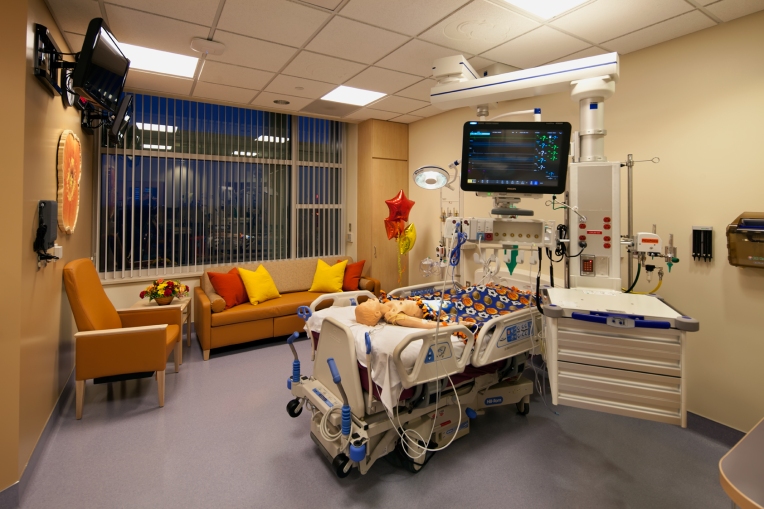 I wanted to reshoot this  with a mannequin to make this feel real to the viewer.   All of the mannequins were being used by the staff in training and we had to wait patiently  to be able to get them for several minutes between training sessions.

Careful pre production scouting tied down the final shoot list, answered what shots have to be done at pre sunrise and dusk.  By having the architect ship the props we were able, as a team effort  add the pillows,  the bear on the bed which gives the space a lived in look.  My input for this was up front, this has to be done at pre sunrise  to  have the contrast of blue light out the windows, which will balance the warmth of the interiors.  Clean, crisp with attention to detail is what I am known for.

A nice clean shot with the fall colors out the window. 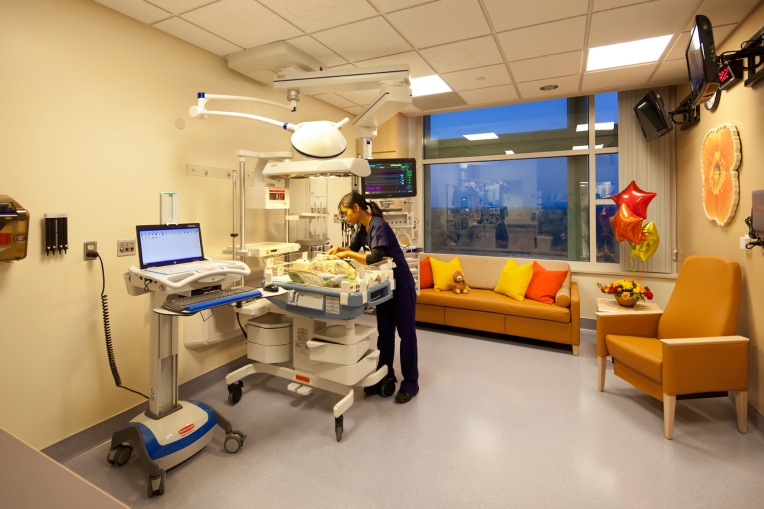 I really like this with the nurse but would have liked it better with the earlier light in the shot above.  Sometimes you just do not have enough time to be everywhere. 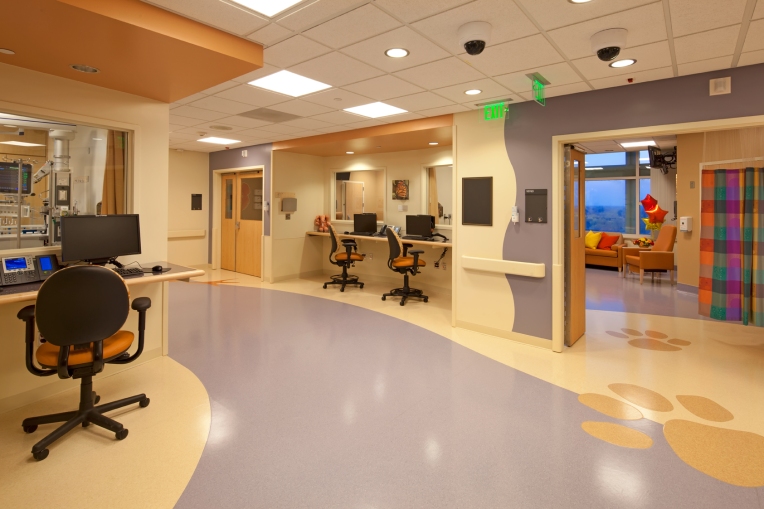 This a a nice 3/4 view that’s puts in the nurses station in the center of the photo.  It’s just critical to have the little bit of blue light out the windows and by adding the balloons gives that extra punch. 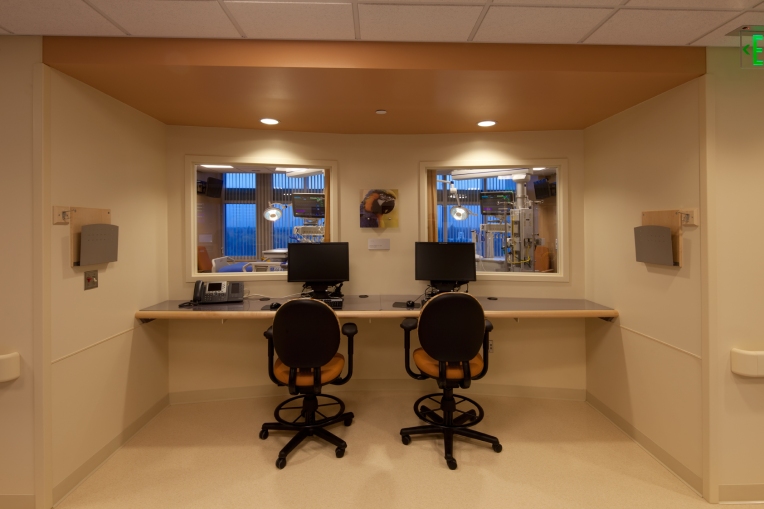 That magic time to have the warmth of the interiors contrast with the color outside.

I got to use my son Daniel as a model before I dropped him off for school.

There are only so many shots that one can do at pre sunrise and dusk.   This was the last shot we did at sunset. 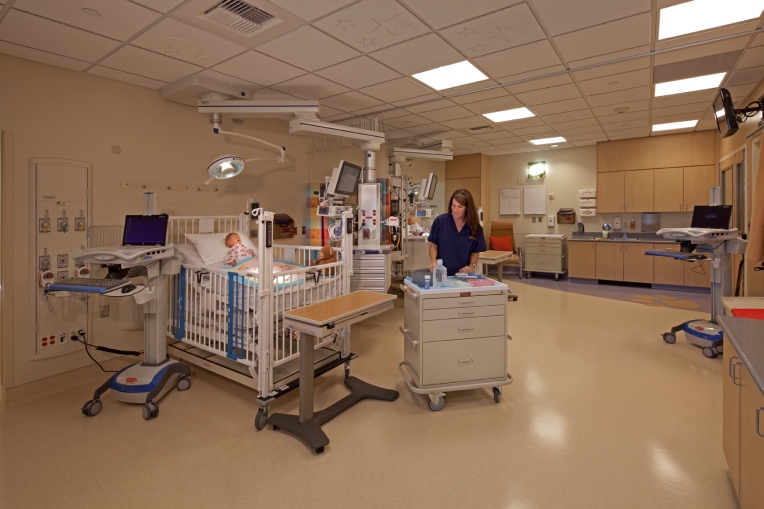 Add a nurse and it gives the viewer a much different feel to the final composition.

Now with all of the critical shots done at pre sunrise  we are now able to work  where we only have to address the people working in the spaces, outside light and composition.

The flowers always adds a nice touch without the architect sending the boxes of props many of these shots would just be ordinary record shots.

People or no people?    Most of the major shots were done with and without people. 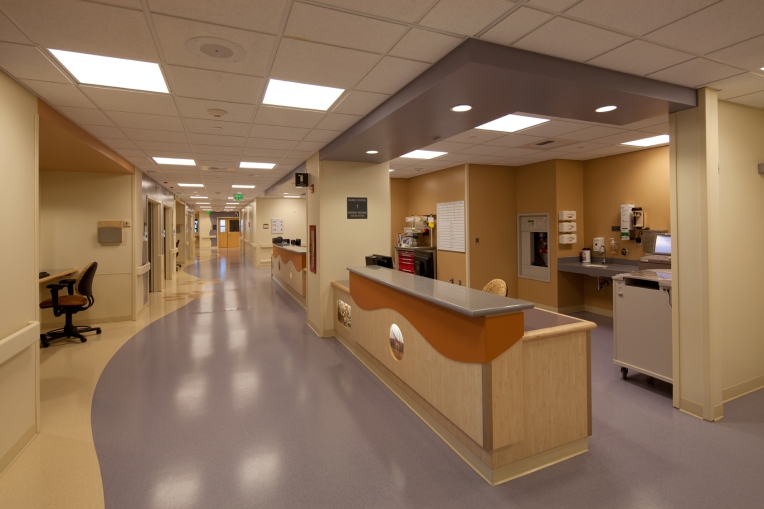 Lots of clean up for all of these shots, move the printer, take all of the clutter out, then put everything back.   I think lots of people think this is how,  I walked into the space and took a picture.   It’s never the case and it always takes longer than what ones thinks. 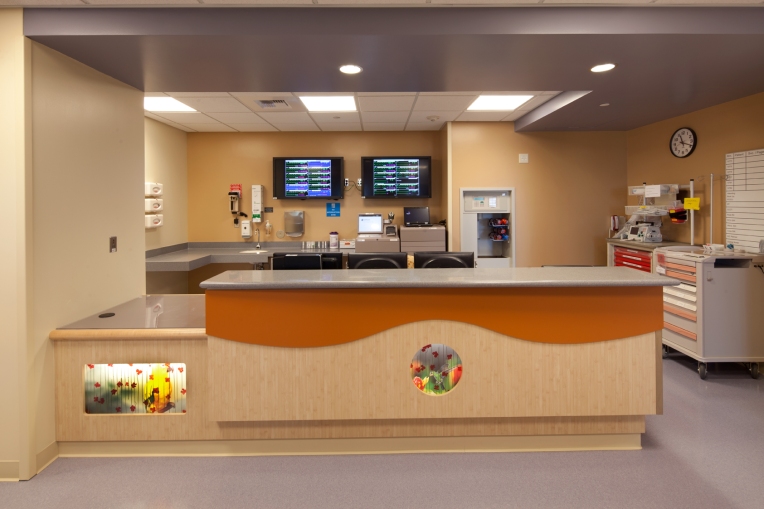 It’s good that we were able to shoot  one day prior to this space being open to the public.  Lots of people working but we were able to work around the people and every shot was a money shot.

People have to look natural and when done correctly, they give an added impact to the illustration.

You just have to get the chicken feet.

Just a bowl of fruit makes this look inviting.

This was a fun shoot, long hours, we all worked together as a team, the efforts from all of us really shows.  Happy to be there to just push the button. 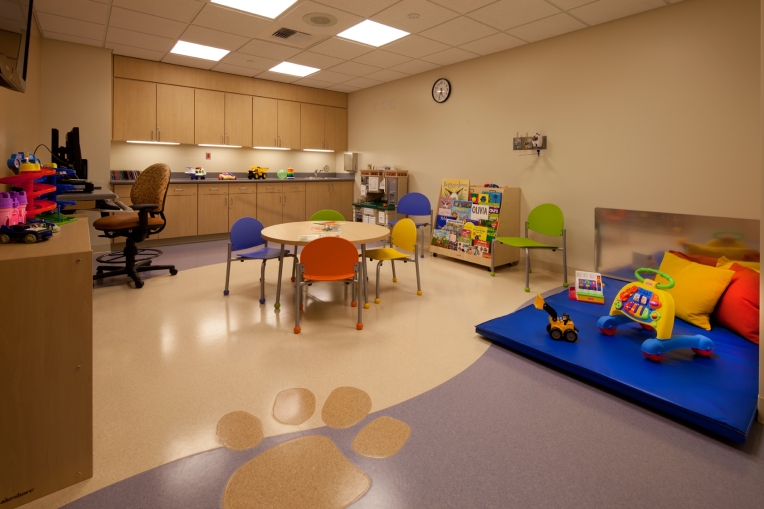 Here is a quote from an Architect that receives my Blog.

Just wanted to let you know how much I enjoy your Journal and your work.  It is uniquely informative to have the opportunity to read about your concept for approaching an assignment and not only see the results, but also understand some of the obstacles.   Some great results!  Congratulations.

When we have the opportunity to shoot some of our work, I hope we can afford to hire you.

It’s makes it worth the effort,  my results are always meet my standards or the job does not go out.